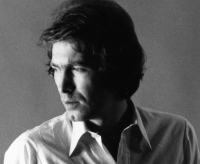 Having moved to Manchester in the mid sixties to study Art and Design at Manchester College of Art, Patrick became lead singer with a 12-piece band at the city’s famous Belle Vue Park Centre singing the Top Twenty Hits of each week to a packed crowd on Friday and Saturday nights. He shared the theatre’s revolving stage with DJ Jimmy Savile’s disco show and top acts such as Billy Fury and PJ Proby.

Off stage, he worked with musicians Hotlegs, who later became 10CC and promoters Harvey Lisberg and Kennedy Street Enterprises.

It wasn’t long before Patrick’s talent was spotted and he was given his own solo performances with backing musicians where he could sing his own songs – and some of his favourites by Tim Hardin, Neil Diamond and Antonio Carlos Jobim.

Once he was in the spotlight on his own, it was DJ Jimmy Savile who brought talent scouts up from London to see Patrick’s show and he was soon signed up to RCA records as a solo recording artist.

His growing career drew him to London, and Patrick moved to Kings Road, Chelsea. He began writing his own music full time and had song-writing contracts with Francis Day & Hunter, Leeds Music and Sunbury Music.

He was first managed by Paul Hollingdale, former presenter of Radio 2’s Breakfast Show and later by Mel Collins, manager of Cat Stevens and The Zombies. Patrick wrote the songs for his first RCA single ‘How Wrong I Was To Leave Her’, the ‘B’ side became a hit in France, recorded as 'Le Rêve De Ma Vie' by singer John William.

Patrick regularly sang on BBC Radio 2’s Night Ride show and had what he describes as the ‘privilege’ of recording in some of the best studios of the time – Air Studio, Phillips, Olympic, the BBC’s Paris and Aeolian Hall Studios, RG Jones and the infamous Abbey Road Studios.

At the same time as writing songs, Patrick enjoyed success penning and performing music and jingles for TV and radio adverts.   Currently Patrick is writing songs for other performers and is producing songs and music for 'Charlie’s Ark' – by Mike Payne (cartoonist and creator of Tatty Teddy) all about a 5 year old boy with a magic ark full of his toy animals.   www.patrickadam.co.uk

The following information was kindly supplied by Patrick Adam on 26th April, 2012. All recorded and photographic material copyright Patrick Adam. 2012. Very special thanks to: P. Adam.

Let’s Communicate
by Bare Sole
Living In A Building
by Beggar's Farm
Zing Went The Strings Of My Heart
by Mandy and The Girlfriends
Live At The Arbouretum
by Gordon Pollitt, Wholesome Fish