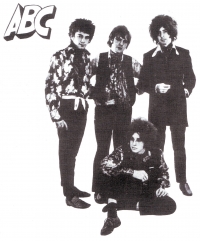 The following publicity shots were kindly submitted by John Cambridge. 2012.

Formed in Hull, 1966. Most members came from another local act called The Attack (not the Decca recording group). The band were given their name by Steve Marriott (lead singer/guitarist with the Small Faces) at a gig in Hull where ABC appeared as a supporting act. They were a successful live act who supported touring acts such as the Pink Floyd (at the Hull Art College Dance). In 1967 they recorded at Fairview Studios, owned by Keith Herd (see entry for: Fairview Productions).

The publicity shots were kindly submitted by John Cambridge. 2012.