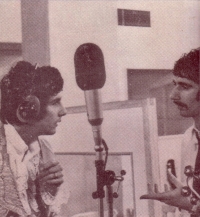 Rick Minas (real name: Caro Minas) and Mike Banwell were a songwriting partnership based in London in 1964. Caro Minas and Bruce Rae set up the Rayrik Sound studios to initially utilise as rehearsal space. Rayrik was based at 1A Belmont Street, Chalk Farm, NW1, London. The studio which was then eqipped with recording desks, was used by famous figures such as Jet Harris who used to frequent the pub next door. Mike Banwell originated from Hampstead and approached Caro Minas with his songs and from there they became a songwriting partnership with Mike Banwell providing the music and Caro Minas, the lyrics. Their songs went on to be recorded by Graham Bond, Chippy, Transatlantics, The Chantelles, Mike Lennox, Patsy Ann Noble, Hamilton and The Hamilton Movement and Caro (Rick) Minas himself. Polydor released two records by Caro Minas as Rick Minas. Caro Minas was involved with Radio London in 1965 where he met DJ Mike Lennox and later became good friends with Cat Stevens. Two further Caro Minas singles were produced by Cat Stevens for Decca records in 1967 and 1968 which were released under another Caro Minas alias, Sasha Caro. Upon the closure of the Rayrik Sound studios in 1968, Caro Minas allegedly took their compositions when opting for a solo career as Sasha Caro. When Rayrik Sound studios closed it's doors, it was re-opened by record producers, Emil Shallet and Vic Keary. Vic Keary had previously founded and run the Maximum Sound studio. Simultaneously, Emil Shallet had been the founder of Blue Beat records. Rayrik was renamed as Chalk Farm Studios and became infamous for being the only UK studio that could properly replicate the Jamaican Ska/Rock Steady sound.

Caro Minas is thought to have left the music scene altogether by 1969 and gone into accounting. According to a press release for Sasha Caro, he was born in 1940 in Rangoon, but fled to India with his family to escape the Japanese army. He arrived in the UK and studied to be an engineer before opening the Rayrik studios. Mike Banwell also left the music scene around this time. Drummer, Mick Greaves went on to play for Winston G and Chaos.