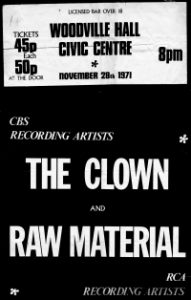 Clown – The Criclewood Demos
by Clown 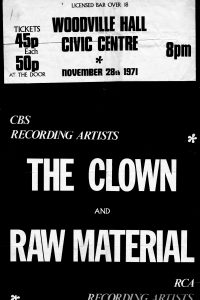 Clown – Living In Dreams
by Clown

Clown originated from Plymouth in 1971. Terry Ball had originally fronted Champagne (see entry) and played in various Blues and R&B bands before them. Paul Arscott was also in Champagne.

Clown were helped out by Mike Weston of another local successful R&B act called The Betterdays (see entry) who arranged and paid for Clown's first ever recording session at  Gemini studios in Cricklewood in January, 1971. These demo recordings (engineered by Philip Cecil and Tony Apple) were then touted around for a record deal. CBS took interest and signed up Clown who had also gained a publishing deal with Chappell immediately after the demos were recorded.

CBS released their first and last single in 1972 to promote the band's LP entitled Trapeze and the band were given a live schedule to fill supporting acts such as Lindisfarne, Man and Black Widow. CBS quickly lost interest in the band and failed to issue their proposed LP. Clown had also been frequent vistors to the studios and made several demo recordings during and after the sessions for their unreleased LP.

As CBS had given up trying to promote the band, Clown eventually split up temporarily losing most members. Dave Ahern and Ley Perryman continued to use the name and recorded more material in hope that there may still be interest from the record companies. This second line-up of Clown included John Morrissey who had previously played in Skye (see entry) who were another Plymouth band. Skye had been offered a record deal by EMI, but the band members turned it down.

All recorded and photographic material kindly supplied by Ley Perryman.