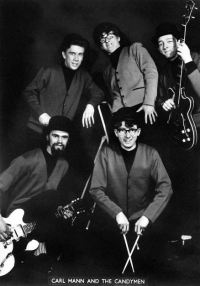 Carl Mann and The Candymen

Carl Mann & Candymen – Recordings
by Carl Mann and The Candymen

Originated from Stoke-on-Trent. Fronted by guitarist ‘Lonnie’. Following extracts taken from a brief interview conducted in 2012:

Legendary Lonnie born at The Lymes, Hartshill, Stoke-on-Trent, 1942.  Both my Mum & Dad had record collections before they met (mutual interest), so when I came along and could reach the handle on the wind up Gramophone I was away! Fisrt instrument consisted of rubber bands on a frying pan before acquiring a Banjo in 1955 which was swapped for some Horror comics from a mate. After leaving school, Lonnie worked at James and Tatton Ltd Ironmongers based in Clough Street Hanley. I started playing in the mid 50's with ‘Skiffle’ groups, guitars, tea chest bass and a washboard. That's where I got the nickname that has stuck, “Lonnie” after the King of Skiffle Lonnie Donegan. We played pubs and clubs where we were paid fees by passing the hat around, the fee's were 24-30 shillings which was big money back then and because of our age we should never have been in the pubs in the first place. We did Skiffle sets in between some of the Big Band spots at the Kings Hall, Stoke and Trentham Gardens Ballroom with the bands of Reg Bassett, Ken Mackintosh, Ken Jones etc.

Back in the 1950's Panton Morris (whom I owe a lot to) was a Jamaican who came to live in Stoke. I learned a lot from him as we did a lot of shows together. He would sing and pick guitar and I would provide rhythm, his party trick was to play his guitar on his lap and play with a glass (A pint pot sometimes), I adapted this to Rock 'n' Roll guitar with a touch of Elmore James and a sprinkle of sounds you could hear on the over shot notes played by Hoot Rains (Steel Guitar) on the Slim Whitman Records.

I've made a handful of 7” singles, EP's and CD's including Elephant Dance, Constipation Shake, Knock me Down, Pick Me Up (Recent to MP3/CD Single in the States/Europe), The 21 track CD, “Twice as Old As Time But Younger Than Most” and of course Wine Glass Rock.. Record Labels I've recorded on include Oak, Barclay, Charly, Nervous, Carrere, Fast Tracks, Rasputin and Rebound. I worked for the Blood Lloyd chain of record shops and went on to run the shops in Church Street and London Road, Stoke which was a great time in the 70's & 80's, records were selling in vast quantities, from Abba to Black Sabbath, Pink Floyd, Slade, Bay City Rollers, Osmonds and even some of my own! I specialised in what you would call today, Retro, Blues, Jazz, Rock 'n' Roll, Rhythm & Blues, Country, Rockabilly and Classical etc. People who visited were locals and we had many visitors from all over the country plus many foreign customers, customers would often ask who was your most famous visitor, that would be Elton John whom I signed a copy of Wine Glass Rock for his famous record collection.

My broadcasting career started with guest spots on BBC Radio Stoke in the early 70's with Mel Hill, Bruno Brooks and Terry Walsh (Topics for Teenagers, I would guest spot to review the new releases) and then when Chris Ellis was away recording with Demon, producer Bill Humphreys thought it would be a good idea to get Lonnie in to fill in on the Tuesday night Rockshow WTKS (When the Knocking Stops). This was a very successful venture that enabled me to get my own show which became “The Legendary Lonnie Sunday Best” which ran for 17 years. I played vinyl and later CD's which were all from my own collection, I also reviewed sent in copies by distributors and artists. The show was assembled at home in my spare time and like the famous 50's Rock 'n' Roll DJ, Alan Freed, I never ever played anything that I did not like myself. There were many accolades and exclusives, a personal letter of praise from Frankie Laine himself. Buddy Holly's first recording “Two Timin 'Woman” got an exclusive first play on my show thanks to my good friend Dave Ravenscroft whom had communication with the Holly family. This recording was done when Buddy Holly was only 12. I was very proud of this as it was the first play on any show, on any station world wide. I Also received a Sony Award Commendation which was read out by Michael Aspell at the Savoy Hotel, London. I was also rated on Magazine Listings in third place, only following John Peel and Humphrey Lyttelton on Specialist Music shows.

I still play guitar after 56 years, the rust has not set in and the “Legendary Lonnie Band” are still going strong in 2012 and beyond. We do Functions, Corporate, Weddings etc and the show consists of 50's/60's Rock 'n' Roll and a few of my own. I've been working together with Professor Ray Johnson MBE for the Staffordshire Film Archive. We've filmed and recorded twenty two numbers out of our show including eight of my own compositions for a forthcoming DVD release which I've documented and elaborated on in between the tracks in a informative and narrative driven style.  No double tracking', no click tracks and no overdubs, this might be funny but I'm serious as a member of PRS, P.P.L. And MCPS. Keep Music Live!