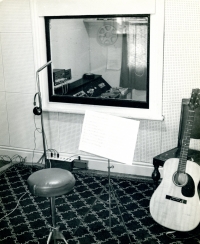 In Britain in the mid-sixties only a handful of independent studios and producers existed outside the control of the major London record labels: RG Jones in Wimbledon, Joe Meek in Holloway and Strawberry Studios in Manchester.

Looking back now it seems I was always destined to spend a lifetime playing and recording music. Few would have guessed it on the family farm in Holmpton, Holderness, East Yorkshire where my life began in 1936. We were Primitive Methodists and went to Chapel twice every Sunday. Dad played the harmonium and Mum sang. Piano lessons started at the age of five with Mrs Shires in Withernsea.

Hearing music on the radio as a child gave me such a thrill: war time songs like Bless Them All and You Are My Sunshine. Later at dances in the village hall I was enchanted by the piano playing - so different from hymns and piano lessons. I knew I had to play like that. Taking the back off my Grandad's valve radio for the first time was just as exciting. It started a life long fascination with electronics and sound.

When I was about twelve years old, one of the workers on the farm let me have a go on his melodeon, and I managed to knock out a tune or two. Then my sister's boyfriend lent me a small piano accordion and I really got to grips with it. Dad bought me a better accordion and my first 'show business' appearance was at a concert in Holmpton School dressed in my Sunday best. More engagements followed at Women's Institutes and church fêtes, and in a pantomime put on by the Holmpton Amateur Dramatic Society.

I started work on the farm after leaving school but had a strong feeling music was my future. Not knowing any musicians I bought a cheap drum kit, built a makeshift bass and taught a couple of village lads to play them. We did mostly dance tunes - quick steps, and foxtrots. For our first proper engagement I booked Holmpton Hall, made posters to put on telegraph poles, organised refreshments and held my first successful dance. We were called The Keith Herd Quartet.

As my name got around The White Thorn Ladies Duo with Olive Messenger on piano and Alice Saunders on drums invited me to join them. We were a big success at village dances in Holderness and had a residency at The Queen's Hotel in Withernsea. I bought one of the first electronic synthesizers - a Clavioline - which gave us a unique sound for the time. Remember Telstar by The Tornadoes?

I'd kept my own group going too but music was changing fast and I wanted to rock 'n' roll like Bill Haley and skiffle like Lonnie Donnegan. A couple of new lads, Mike and Geoff Clark, joined the group and I built another double bass, this time with an electric pick up made from army surplus gear bought at Fanthorpe's in Hull. After playing for a Young Farmers' Club barbecue at a farm near Aldborough, the group with its new sound took off. Olive joined us and we started playing rock'n'roll and old time and modern dance music in the Holderness village halls to big crowds; the girls wearing their cardigans backwards and spinning round in full circle skirts to the delight of the boys. We ran a Saturday night dance with the local football club at Burton Pidsea Village Hall, eventually alternating with the Grand Pavilion at Withernsea. There was a sign there saying 'No Jitterbugging' obviously a previous attempt at holding back the incoming tide of musical change.

The Withernsea Council Entertainments Committee offered us a full summer season instead of their usual big band. I learned to play the organ in the Sun Lounge (now Teddy's Club) and a girl singer called Valerie Long joined the group which played most nights at the Pavilion; Valerie sang the ballads, I sang the rock 'n' roll. We went back the next year and Dave Tenney and Mike Heap from Hull joined on guitar and drums. The equipment was getting better too: an electric bass guitar; a PA with a Linear 30 amplifier and Goodman speakers; a Watkins Copy Cat Echo unit. I built another echo unit by adapting a Grundig tape recorder and we were starting to sound like the groups on the records.

In 1962 I did my first recording in the kitchen of the house in Withernsea I'd moved to with Vicky whom I'd married in 1958. I built a four channel mixer, plugged it into the Grundig and used the group's microphones. We took the tape down to Dick James Music in London. They signed Dave Tenney but not the group. However the excitement of my first recording session never left me.

Back home money was tight as our first daughter Jackie was born in 1962. Cornell's Music Shop on Spring Bank, Hull had opened an organ showroom at Blandon's Department Store and Mr. Cornell offered me a job demonstrating and selling organs. Salesmanship was not my strong point but I'd noticed lots of broken amplifiers at the back of the shop and was taken on to repair them. Cornell's was used by all the Hull 60's beat groups and I started repairing and adapting their Vox AC30 amplifiers, Linear Amplifiers and Reslo mics. Sales of electronic organs were booming and I became the service engineer for models sold by Cornell's.

The group got residencies at the Gondola Club Hull, the Beverley Regal and Cave Castle, South Cave. For a short while Keith Kelly, who'd had a top ten single with Tease Me, joined us; at our first appearance with Keith at the Regal the girls screamed!

By the mid sixties I was questioning if I really wanted to be a pop star! However the desire to start my own studio and become successful that way was becoming ever stronger. The only proper studios in those days were in London, full of very expensive equipment and engineers in white coats. There were very few facilities in the provinces, little affordable equipment and good results required a great deal of expertise.

Our second daughter Lisa came along in 1965 and we moved to Willerby near Hull to a house called Fairview. The house had two front rooms which meant I could use one as a studio. As the plans formed in my head I met Basil Kirchin when I went round to repair his Farfisa organ. Basil's dad was the leader of the Ivor Kirchen Big Band who were the first resident band at the Mecca Locarno Ballroom in Hull. Basil had twice been voted NME jazz drummer of the year. I was a bit star struck but Basil, always on the look out for new collaborators, suggested we did some recording together. Basil used to bring round his Revox stereo tape recorder to demo his avant-garde music that would later be used in films such as The Abominable Dr Phibes. We became close friends and he ended up lodging with us for quite long periods while he worked on his album Worlds Within Worlds. I learned a lot from Basil.

By 1966 the spare front room was equipped with a stereo Tandberg tape recorder, which allowed me to 'bounce' tracks and the usual egg boxes stuck on the wall. I built an eight channel mixer, a reverb echo plate and adapted a second hand tape recorder for repeat echo. Later on, a control room and drum booth were added. The first group to use the studio was The Strollers and I was thrilled with the results. Soon there was a steady stream of local groups paying £2 per hour to record a demo to send down to London.

In1967 two local songwriters, Rick Kemp and Barry Paterson, suggested we get together and demo their songs at Fairview in the hope of getting a deal. Eventually Fairview Musical Services was set up as a song writing, production and management team; a 'one stop shop' for local groups - we could even fix their vans!

A publishing deal was secured with Shampan Music in London who had an arrangement with CBS Records. The first release was Out Of The BlueLife's A Gamble by Hull group Roger Bloom's Hammer. We had to go down to London to re-record the tracks in a 'proper' studio. When the record came out it got lots of airtime on pirate radio stations like Caroline and 270. The follow up, Polly Pan15 Temperature Rise, did a little bit better reaching number 35 in the Radio London charts and got played on the BBC Light programme. Fortune Teller's Friend with Jerry Page was also re-recorded in London and got a few radio plays.

Fairview Musical Services eventually fizzled out but Rick Kemp joined the group on bass and the front room studio lasted for seven years and hundreds of sessions. A few stand out: Mandy and the Girlfriends - Hull's first all girl group; Michael Chapman; The Mandrakes who had a singer called (Robert) Allan Palmer; Michelle's Musketeers; The Hammer with Rod Temperton on keyboards who later wrote Thriller for Michael Jackson; Gerry Widd; The Rats with Mick Ronson on guitar who went on to become one of David Bowie's Spiders from Mars; Marty Wilde who recorded an entry for the Eurovision Song Contest; Dave Greaves and Steve Halliwell.

Meanwhile the group carried on and in 1968 singer Johnny Small and guitarist Steve Trice joined. We became Johnny Small & The Little People and went full time 'pro' playing night clubs all over the country. The highlight was going on ITV's Opportunity Knocks - we came third. After eighteen months, life on the road was losing its attraction and I put The Keith Herd Group back together to make some money. I finally called it a day in 1973 to concentrate on the studio full time.

The studio equipment basically stayed the same over the seven years and as groups got louder and more complicated, it reached the limit of its capabilities. Since 1970 I'd been planning a new studio in a converted barn in the back garden. I built a sixteen channel mixing desk and bought a second hand three track Ampex tape machine. In 1973, in partnership with Pete Green who was in the band at the time, the new studio opened its doors and Basil Kirchin came over from Switzerland to produce the first album…

With very special thanks to Keith Herd for his invaluable assistance, time and support.