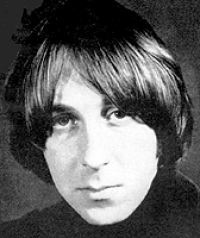 Barry Fantoni was born in London on 28 February 1940, the son of Peter Fantoni, an Italian-born painter. Educated at Archbishop Temple School, London, Fantoni then studied at Camberwell School of Arts and Crafts from 1954 to 1958. "I enrolled as a junior student", he later recalled, "a month short of my fifteenth birthday."
Camberwell was a revelation to Fantoni. "A liberal attitude to teaching art offered more than just courses in painting", he recalled: "Jazz was one. Big Names on the British Jazz Scene had recently been students. Names like Monty Sunshine, Wally Fawkes and Humphrey Lyttelton. The traditional jazz revival more or less began at Camberwell...I thought: now I can play jazz, and paint. Or, instead of." Fantoni learned to play the clarinet, like Monty Sunshine and Wally Fawkes, but, as he later admitted, he got expelled "for setting fire to a chair in the common room, being sick in the lavatory, [and] going after the birds."
Camberwell told him they could not tolerate "your drunken behaviour, your lack of respect for property, your theft of the student union funds, your wrecking the home of one of the teachers in a state of drunken madness..." So Fantoni moved to the Slade and spent five years working as a painter, helping to develop pop-art. In 1963 he had his first cartoon published in Private Eye, and has been on the editorial staff ever since. As he puts it, "I was actively involved in the creation of the sixties." In 1967 the Daily Mirror declared that "Barry doesn't so much know what is in - he decides it."
Fantoni saw himself as an iconoclast, and wrote scripts for the BBC programme "That Was The Week That Was" in 1962. In 1963 he and Willie Rushton exhibited a painting at the Royal Academy using the name "Stuart Harris" - it was entitled "Nude Figure" and showed a bishop, a judge, and a general reading a pornographic magazine. Fantoni also drew a series for Private Eye entitled "Hall of Fame" which he claimed was designed "to chop people down to size": "I want to bring about an increasing social awareness of what these people mean." The cartoon published on 23 August 1963 showed the actor Terry-Thomas as a drunk outside a theatre. Fantoni said he was "rather complimented" when Terry-Thomas sued for libel, but the result was a climb-down, and damages.
In 1966 Fantoni presented "A Whole Scene Going On", a BBC series on music and fashion where Twiggy made her first appearance, and for which Fantoni was voted TV Personality of the Year. At Private Eye Fantoni not only supplied cartoons and caricatures, but wrote the "E. J. Thribb" and "Old Jewett" columns. With Richard Ingrams he also co-wrote mock serials by "Sylvie Krin". From 1968 to 1989 Fantoni also drew for the Listener, and for Radio Times, and from 1969 to 1974 he was editor of St Martin's Review.
From 1973 to 1977 Fantoni was art critic of The Times, and in 1976 and 1977 was record reviewer for Punch. From 1983 to 1991 he was Diary cartoonist of The Times. "I did a daily cartoon for The Times for years", he later recalled, "and I was told that it would kill me and it very nearly did. It is hard work being funny." Fantoni has also appeared as a film and TV actor - including an appearance as the musician "Zooty Sumatra" in an episode of the 1969 ITV sitcom "Ours is a Nice House". He has also appeared in TV commercials, written detective novels featuring "Mike Dime", created a one-man show "From the Dragon's Mouth" and, in 1990, formed Barry Fantoni's Jazz Circus. His first play, "Modigliani, My Love", opened in Paris in 1999.
As well as his familiar spiky, kindergarten-style pocket cartoons, Fantoni is known for his pop-art caricatures. He does not wish to be remembered for his cartooning, observing that "If I could be honest I would put it at the bottom of the list. It requires so little effort."

Waterloo Station' (Bench Number Three) was composed by Geoff Stephens and also recorded by other artists. This particular recording also featured John Bobin of The Fingers (see entry) as a contributing musician playing the Timpani.

All songs recorded at Denmark Street studios for Southern Music.

Very special thanks to Barry Fantoni.