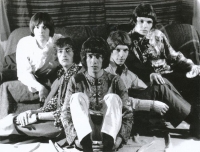 Coconut Mushroom originated from Portsmouth in 1967 from two local bands, The Inspiration and Tangerine Slyde. As Coconut Mushroom, they were signed to Apple Corps (The Beatles) by producer, Mike Berry. They recorded their first four songs at Eden studios in 1968 with Colin Carter composing. Run and Time Will Tell were projected to be released as a single by Decca, but the label pulled out. Berry arranged for the band to record cover versions of chart hits which would then end up on various budget LPs (e.g. Top Of The Pops samplers). Members of the band were also employed by Mike Berry to record a version of Maxwell's Silver Hammer (The Beatles). The version was then released under the name of Good Ship Lollipop (a real band from Bideford). Coconut Mushroom's version of The Who classic Call Me Lightning was eventually given to the Good Vibrations in 1969 unbeknown to the band at the time. Although they hadn't enjoyed their own record release, they had actually played on various record releases! The band auditioned yet again for Decca, but there was still no record release forthcoming. By the end of 1970, Roger Giffin had quit the band and Nigel Slydell was recruited from another Portsmouth band, Virgin Circle to add keyboards to their new sound. The band shortened their name to Mushroom and headed out on the usual college gig circuit and lasted for another two years. Barry Paul had replaced original member John Clark in April, 1969. Mick McGuigan had replaced Graham Barnes, but was in turn eventually replaced by Mick Feat in 1970. Roger Giffin's brother Colin Giffin had been playing in a band called The End who were signed to Decca by Bill Wyman of the Rolling Stones.

Very special thanks to Nigel Grundy for the following photographs of Coconut Mushroom.

Very special thanks to Nigel Grundy for the following photographs of Coconut Mushroom.

One Kinda Favour
by Clique
The Loser
by Bone
Cover Girl
by Perfumed Garden
1. Flip Flop
by Wholesome Fish