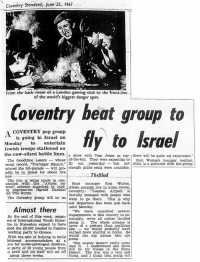 Formed in Coventry, 1967. Fontana released their only single in 1967. Their A-side 'Trafalgar Square' was composed by Barry Fantoni. The following extract has been taken from

http://www.broadgategnome.co.uk/ which details the story of the band when they were known as The Sensations:

Previously The Little Darlings, They released a single in May 1966 'Look At My Baby', which was a Radio London 'Record Of The Week'.

The follow up recieved fascinating reviews, '...the boys have wasted no time recording a very weird hypnotic, as yet untitled song, which features Indian Sitar and no lyrics..' said the Coventry Standard in May 1966. Midland Beat's July 1966 description was ' ...the third disc, released in a couple of weeks is described as"way out " featuring Sitar, scat singing and a religioso chant...' which sounds very Yardbirds.

There were a number of significant things happening in July 1966  Barry Eaton left, but the most exciting was Liberty Records signed the band and were set to release 'Look At My Baby' in the U.S. , when none other than Sonny & Cher heard the band and insisted the intended B-side, 'What A Wonderful Feeling' was also released as an A-side. The label then asked for two other tracks to be recorded and sent to the U.S. for B-Sides.

What happened next and whether they were issued isn't clear, but the band became The Good Time Losers in 1967.