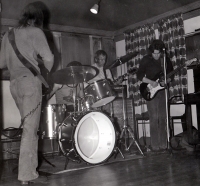 Baby Bertha formed from the ashes of Relative in late 1971. Several members came and went before the band featuring Dave Ellis, guitar/vocals, and Des Law, drums, finally settled into a groove with the addition of Ian Mclaughlin on bass and Roger 'Proff' Perry on rhythm guitar. The band went from strength to strength playing the south coast from Hastings to Southampton throughout 1972. In January, '72, they cut a demo LP at SRT Studios, Luton featuring songs mainly written by Dave Ellis. Musical differences arose when Des decided he wanted to be a DJ rather than a drummer. As luck would have it, Dave and Ian met Pete Gibbons, drummer with Sweet Poison, at the Bournmouth Folk and Rock contest in February 1973. Pete was an outstanding, agressive drummer and after one jam, they formed the band Charge. Sadly, both Pete and Roger Perry are no longer with us, but I'm sure they are taking a break from jamming with all the greats we've lost over the years, looking down from on high, and having a little chuckle at seeing themselves remembered on such a great site as the British Music Archive. A big thank you to the BMA for all they've done.

All recorded and photographic material copyright D. Ellis, I. McLaughlin. 2012.