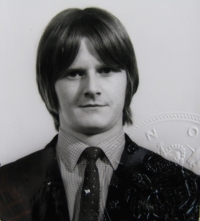 Alfie Shepherd (aka Clive Shepherd) had been a member of Angel Pavement, a group from York who were embraced by the psychedelic era in the 1960s. In the aftermath of Angel Pavement's split in December, 1970, Alfie Shepherd continued to write and record at home. Shepherd had written a musical adaptation of the famous children's novel,Wind In The Willows, with a view to recording the songs in the studio with Angel Pavement. Unfortunately, the group disbanded before this could be arranged. Angel Pavement's ex-manager, Mal Spence took several of his tapes, including the ‘Wind in the Willows’ project demo tape, down to London to play to various music establishments and there was considerable interest, but all offers involved Shepherd being involved in the recording process, which was not what he wanted as he had decided that he no longer wished to perform. The Wind In The Willows project was a musical adaptation of the famous story written by Kenneth Grahame. Shepherd was assisted lyrically by his friend and Angel Pavement roadie, Terry Morris. Although the project never got any further than the home demo stage, Shepherd continued writing and recording in this way and some recordings from this period appear here. Noted music historian and curator, David Wells issued a CD containing the Wind In The Willows project and further demos, through his CD outlet, Wooden Hill in 2008. Wooden Hill also featured a number of recorded demos by Angel Pavement on a seperate anthology CD in 2005. Some of these recordings appear on the Angel Pavement artist page (see entry). The Wind In The Willows project was recorded in late, 1969 with further demos recorded in 1970.

All recorded and photographic material contributed by Clive 'Alfie' Shepherd.

This Side Up
by J.P. Sunshine
All Your Love
by Free Expression
Do Not Wait For Better Times
by Peep Show
Champion Dung Spreader
by Graded Grains