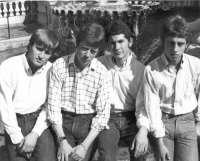 Originated from Feltham, West London in 1966 as Themselves. Themselves are thought to have cut an acetate demo featuring Have You Heard (see entry) in 1966. The band were signed to Deram records in 1967 for two singles. Arthur was possibly left over from a recording session for Deram records circa 1968. Keith Purnell had also assisted Mic Reda (see entry) on his solo recordings made at Graham Clark studios sometime around 1967.

The story of Virgin Sleep begins in early 1965 when singer Tony Reese (aka Rees) and lead guitarist Keith Purnell put together Themselves with Renwick MacDonald (rhythm guitar), Brian Barney (bass) and John Bobbins (drums). The original line up was profiled in the 5 March 1965 issue of the Middlesex Chronicle (Hounslow Edition).

The same newspaper ran a second profile on Themselves in its 28 April 1967 issue and listed the personnel as Tony Rees (lead vocals, bass); Keith Purnell (lead guitar); Alan Barnes (rhythm guitar) and Rick Quilty (drums). The article says that the original Themselves split up two years ago, most likely in late 1965.

According to the 8 September 1967 edition of the Middlesex Chronicle (Hounslow Edition), Rees and Purnell had put together a new version of Themselves in January 1967, which changed name to Virgin Sleep in August to chime with the “Summer of Love”.

The text was submitted by the Strange Brew podcast.