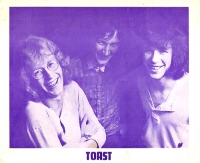 Originated in Dorset circa 1967. Toast signed with John Edward's Instant productions agency in 1968 recording two of their own songs as demos. Through their successful audition, the band were signed to CBS records for a single release on January, 30th, 1970 (Flowers Never Bend With The Rainfall b/w Summer Of Miranda). Toast split in 1970/71 and reformed as Gringo adding a female singer to their line-up (identity unknown). This collaboration produced an LP and a single with MCA records in 1971. Having supported many bands and famous names throught their active period, Gringo came to a halt in 1973 with Henry Marsh leaving to join Sailor. John perry teamed up with Caravan before joining Quantam Jump and Simon Byrne joined Blackwater Junction and Brotherhood Of Man. Henry Marsh is the great-great-great grandson of Lord Collingwood.

All recorded and photographic material kindly supplied by Henry Marsh 2013.