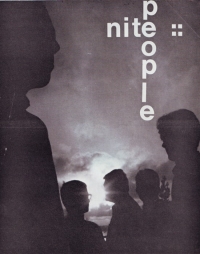 Originated from Bournemouth circa 1965. Tracks 1 and 2 taken from Avenue Artists demo disc acetate. Recorded circa 1967 at Bob Potter's studio in Mytchett, Surrey (now Lakeside studios). Track 3 recorded in London, circa 1969. Track 3 was recorded for a proposed release, possibly to be included on their LP for Page One records entitled P.M. issued in 1970, Nite People were signed to Fontana records in 1966 before signing to Page One in 1969.  Nite People disbanded in 1970.

GROUP OF THE FUTURE

"If you are spending your holiday this year at Bourne­mouth the chances are that you will hear many of the young "locals" raving about a bright group down there called The Nite People. And if you were at the Top 20 Club on Monday you will know they have good cause to get excited. For on that evening The Nlte People occupied the star spot at the Town Hall and they made a deep and favourable impression with members. In fact their act epitomised the true purpose of the Top 20 Club—to present sensible, good quality popular music from up-and-com­ing musicians. And it was even more gratifying to find this being provided by a West Country group. Their material performed at the Club was of an exceptionally high professional standard, it catered for most musical tastes and was executed with precision care, and neatness. Good examples of this were their arrangements of Mel Torne's sultry blues speciality, 'I'm Coming Home" and "Shake" the number we shall always associate with the late Sam Cooke. There are five Nite People, but upon hearing them one gets the impression there are seven or eight playing because the sound—not overpowering—is so expansive. Meet them. There's Barry Curtis rippling away on the keys of the Hammond organ; Chris Ferguson occupy­ing the drum stool; Jimmy War­wick strumming guitar and doing vocals: Francis Shipstone on bass and helping out with the singing, and Patrick Bell, an experienced tenor sax player and flautist, who used to be with Georgie Fame and The Blue Flames. Terry Rolph is their young, go-ahead manager and the group belong to Avenue Artistes Ltd. that trend-setting Southampton agency who also have under their wing Dave Dee and The Meddy Evils, two groups very familiar with Club members. The boys have secured engagements in all the prominent London clubs, at ballrooms in different parts of the country, and weekly Summer seasons at such resorts as Torquay and Newquay. The holidaymakers should love em! Undoubtedly these five, unassuming players have the best things still to come. Born a year ago, The Nite People, if they continue to pursue their present policy, will find themselves at the keystone of Britain’s future popular music developments. They are a group of the future."

Special thanks to: Richard Prest (Kernow Beat), Barry Curtis. Special thanks also to Ernie Scott and family for various pieces of associated memorabilia.