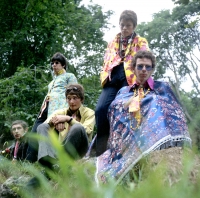 The Mandrakes evolved from a gathering of pupils from the Scarborough High School for Boys during the summer of 1964.  Meetings and practice under the work in progress title of The Titans, first in the crypt of a church and then a former chicken hut, took place.  Allen (to become Robert in1969) Palmer joined after a successful audition and the first gig took place in a local youth club towards the end of the year.

After a road traffic accident involving Ron Gillette, a local impresario, and Allen Palmer, Ron took the Mandrakes under his wing and the quality of the equipment and gigs steadily improved during the year with the band evolving into a four piece when John Standidge left.

Keith Griffin left to joint the R.A.F. in July and the band membership then settled down for a long period of stability, with a growing fan base throughout the whole of Yorkshire.  Late in the year several recordings were made on a two-track in the front room of Mick Cooke’s parents’ house, two songs written by band members Allen Palmer (Concentrate) and Mick Cooke (Big House) are featured in the archive along with three further songs (covers). See tracks 8, 9, 10 on list of  'Recordings'.

With an established reputation the Mandrakes embraced all the trends of the period and during the summer were filmed by Tyne Tees Television at one of the early flower power festivals.  A few weeks later they were mobbed on stage at a club in Rotherham and the set had to be terminated. Ron Gillette moved into discos and passed the reins as group manager over to local photographer Brian Cooke, who over the years has produced a volume of Mandrake photographs, a selection of which is presented in the Archive.

A year of change started with the recording of the demo tape of the two Robert Palmer songs “Baby-sitting” and “It’s The Hardest Thing”. The focus of the group now changed from popular covers to more underground material and the gigs from village halls to universities.  Brian Cooke’s light show was renowned as being every bit as good as the Pink Floyds. In the early summer Pete Liley left and the band operated for a time as a four piece but not before they’d been mobbed yet again at the same Rotherham club!  Allan Black joined soon after that, and Mick Cooke left in the autumn to be replaced by Derek Gill and another period of musical development and wider based popularity followed.

Early in the year the Mandrakes undertook a successful four week tour of Denmark and a promotional film was produced by Brian for the Hull Arts Festival. By this time Robert was being “noticed” and in July was poached by the Alan Bown Set.  His last gig was on 23 July at The Penthouse, Scarborough, and he never played with the group again, even though there were several re-union events. Difficult to follow, Robert was eventually replaced by Angela Holmes-Dixon which involved the band in a complete musical change of direction.

Late in 1970 the last remaining original “Titan” Mandrake from 1964, Mick Stephenson, left to be replaced by John Cambridge, who had just left David Bowie’s ‘Hype’ and returned to Yorkshire.  As Angela also left, another female singer called Maggie Fiorenza was tried but eventually the group reverted to a lead male singer in Allan Black.

1971 was highlighted with a one-night stand at The Lord Mayor’s Hall in Paris. This line-up then recorded ‘Someone Had the Nerve to Pity Me’, ‘Stranger to Himself’ & ‘Looking Forward to Being There’ - all Allan Black compositions, which are on the Archive.  Shortly after, the band members drifted in their own directions and the Mandrakes ceased to gig.

Postscript 1: With hindsight, it’s easy to see why Palmer got noticed, given the
bands that The Mandrakes were lucky enough to support on the University, Concert, and Festival circuit. These include -

Postscript 2: There have been a limited number of reunion gigs since.  Robert Palmer was invited to the first two but failed to turn up.  After Robert’s sadly premature death in 2003, just about all of the group members who had played with him during the 60’s, plus his younger brother Mark, performed a memorial concert for charity before a sell out crowd, at what has been described by most there as just about the best gig they ever went to.

The complete photographic archive of The Mandrakes is available at: