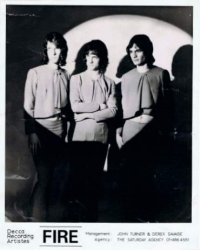 Fire originated from Hounslow in 1966 as Friday's Chyld (see entry). Dave Lambert, Bob Voice and Dick Dufall came together as teenagers playing local Hounslow gigs in late 1966. After two recording sessions for R.G.Jones' studios in Morden, Surrey, the band were managed by John Turner and Derek Savage. Under new management, the band recorded two demos at Decca's West Hampstead studios. The band were then introduced to producers, Mike Berry and Terry Doran who worked for Apple Corps. Ltd. This new partnership prompted Fire's debut single for Decca, Father's Name Is Dad b/w Treacle Toffee World released in March, 1968. Although Fire had recorded many further demos, their own compositions were ignored and a second single penned by Mike Berry, Round The Gum Treeb/w Toothy Ruthie (written by John Turner and Derek Savage) would be issued as their second and final single.  All Fire members refused to play on the recordings for this single. After several disagreements with their management and Apple Corps. Ltd. Fire returned from a lengthy tour and settled down to record some new material for a proposed LP. At this point, Fire change production company and switch to Hooray productions (a company set up by an old friend of the band). Hooray would licence their songs to Pye records and at this point, it would be Pye who issued Fire's only LP, The Magic Shoemaker in 1970. All of the tracks presented here were originally intended for this LP, but failed to make it onto the final tracklisting. Tracks 3 & 4 feature Paul Brett on guitar and ironically, Bob Voice and Dick Dufall joined up with Paul Brett in Paul Brett's Sage whose LP was also issued by Pye records in 1970. Lambert recruited Pete Sulley, Graham Keedy and Dennis Taylor as new Fire members, but after four demos were recorded, they disbanded and Fire was no more. Lambert moved on to bigger things with the King Earl Boogie Band and The Strawbs. In 1999, a retrospective CD release compiled all of their commercially unreleased recordings for Decca and Pye and beyond and included the four recordings presented here. This CD edition was entitled Underground and Overhead, conceived and produced by David Wells through his specialist outlet, Wooden Hill. Dave Lambert has very kindly permitted us to host four of these recordings on the website along with the two surviving recordings made by Friday's Chyld.