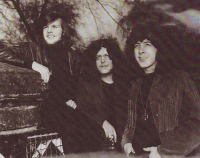 The rock band Barnabus formed in 1970, in Leamington Spa, when pop covers band the Jay Bee Kay Pees split. Lead guitarist John Storer and bass guitarist Keith Hancock, enrolled drummer Tony Cox from the also recently defunct Rockin’ Chair Blues Band. Barnabus started out playing covers from bands such as Black Sabbath, Trapeze, Deep Purple, to name but a few, but before long they progressed to writing their own numbers, with the help of a young lyricist/poet called Les Bates. They played all over the local area and in London. They were the support act for several "name" bands of the time - Man, Edgar Broughton, Trapeze. They even supported Hawkwind at the Coventry Locarno, and in 1971 recorded an album at Monty Bird’s studios, in Snitterfield near Stratford Upon Avon. Barnabus won the Midlands heat of the Melody Maker Rock & Folk contest, in 1972, where the judges were Ozzy Osbourne and Tony Iommi. The band eventually split up a year later, but reformed for a few charity gigs in 2009. All the members now play in other bands, but still  play the occasional gig together. The band were promoted by their booking agents as Barnabas Legge although the band stuck with Barnabus themselves.

NB. Monty Bird's Snitterfield studios became better known regionally as Tank Studios. Monty Bird was joined by Bob Young, a local entrepreneur who had formed the Sunshine Music agency, ran a folk club/venue and formed A Band Called George (Bell recording artistes). Tank studios was formed along with an outlet label which produced some releases in the mid to late seventies.

All songs composed by Barnabus except tracks 1 and 6.