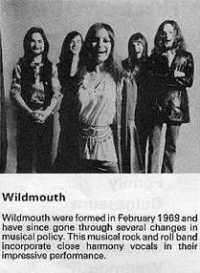 Active on the festival circuit circa 1969/1970. Wildmouth later recorded several songs for Pye with a view to signing to Pye subsidiary, Dawn. Unfortunately these recordings have not been located. Band members featured on the acetate demo recording are: Cord Rees, Mick Wilson (vocals on A House Is Not A Motel), Roland Roberts, Bob Ward and Jo Hanson.

With no contract signed, the band folded and songwriter, Bob Ward left to join Arthur Brown as his roadie. Bob Ward eventually went on to organise tours for major artists such as American R&B artists, Beyonce for her UK tours.