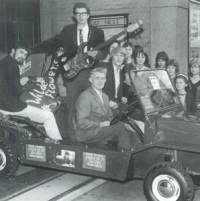 (The following text was composed by Nigel Camilleri for DPRP, 2001)Various musicians in the line-up came and went with Hugh Hopper and Robert Wyatt playing in the Daevid Allen Trio in the early 1960s. From The Wilde Flowers arose such notable Canterbury acts as; Caravan, Soft Machine and Kevin Ayers.

November or December 1964: Kevin Ayers's bungalow, Swalecliffe, Canterbury, Kent, UK
The Wilde Flowers debuted live playing at a private party. This was only the first of several parties organized by the band to "testing their improvements".

July 31, 1965: The Beehive, Canterbury, Kent, UK
Former singer and pianist of the famous The Tornados, Norman Hale, sang with the band as guest tonight.

ca. September - December 1965: ABC Cinema, Canterbury, Kent, UK
The band played there every week on Saturdays mornings between the films.

A complete overview of this artist's recorded history has been made available by Voiceprint records, 1994.

All recorded and photographic material kindly submitted and permitted by Brian Hopper. 2012.

All recorded and photographic material copyright B. Hopper. 2012.

The following text was composed by Nigel Camilleri for DPRP, 2001: