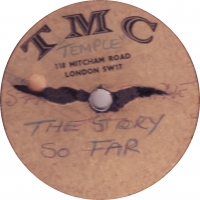 Originated from Lewes, Sussex circa 1967. Originally named as Satanic Temple, but dropped the 'Satanic' tag over fears of negative opinions! Recorded five self-penned songs in 1972-1973 at T.M.C. studios in London as Satanic Temple. Made further recordings as Temple in 1975.

Roadie, who also did a comedy turn during our later gigs was Stuart Marfleet, who has now sadly passed away.

Both Stuart and Paul are much missed.

As the band grew in popularity in the East Sussex area we started promoting our own gigs at many local halls and venues.  The King and Queen, the Hungry Years and the Richmond, all in Brighton, were popular venues where the band could showcase itself.

In 1974 the band signed its first contract to tour in West Germany, July 1974 for the Grand Attractions Agency following an audition in London.  This was followed by a further visit in December of that year.

Temple first started recording (as Temple) in 1975 at a local studio owned by a friend, and then later at Pebble Beach Sound Recorders in Worthing, West Sussex, which was owned by Adam Sieff, of Marks and Spencer's fame.

Temple also toured in Holland where they were very popular, particularly when featuring their rendition of the 1973 hit Radar Love by Golden Earring.

The band split in 1978, with Phil heading off on a solo career, leaving Andre and Kevin to form “Double Vision”, a popular local duo.

The following text was submitted by Kevin Purdie:

Special thanks to:  David and Simon Stonehouse, Kevin Purdie.