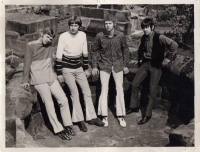 Originally known as the Fourth Dimension then Wellingtons Boot before finally becoming Mysty Dgynn . The band came from Wakefield in Yorkshire.

As Wellingtons Boot, Pete Bradley swapped the guitar to play organ and Mick Campy played guitar. The band started to write their own songs and recorded three songs at King street studios in Huddersfield which was owned and run by Mat Mathias of the famous Matamp amplifiers before joining Cliff Cooper to assist in developing the Orange amplifier.

I Will Love You Forever - unknown composer.

(Pete Bradley hosts his own website: Roll Back The Years )

Below photo of Mysty Dgynn circa 1968. All recorded and photographic material copright P. Bradley. 2011.

Orange Sailboat
by Fairview Production
Soldier, Battles, Child of Nation
by Charge (Bournemouth)
Just Like I Treat You
by Carl Mann and The Candymen
Animal Magic
by Graded Grains