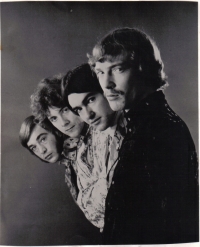 Don Smith, Tintern Abbeys' original guitarist who featured on their sole single, began his relatively short musical  career with a band called the "Turnkeys" In Richmond in the mid 60s. After he had been playing guitar for less than two years, by chance they scored a part (2 music tracks) in a black & white film (The Little Ones/1965) when they were  overheard rehearsing by the daughter of Director Jim Connolly.

It was During 1966/7, at the height of the Kings Road scene during many visits to clubs in the area, that the original  line up of Tintern Abbey was formed by Don Smith after meeting David MacTavish at the Overseas Visitors Club in  EarlsCourt London.  Smith brought John Dalton into the band after a meeting in the Cromwellian Club in South Kensington and  Mactavish brought Stuart Mackay into the band after a meeting at the dole office, and it was this grouping of musicians  who formed the quintessentially psychedelic Tintern Abbey.

With the help of a girlfriend of David Mactavish, the band gained financing and much promotion courtesy of Nigel Samuels  (International Times), and an acetate demo was cut  on the 29th July 1967 (Paid for by a friend of Mactavish,not Samuels)  at R.G.Jones OAK studios, featuring Busy Bee/Bumblebee (Beeside) and Black Jack, which was turned down in favour of  Vacuum Cleaner for the Deram release.  After their single release, the band began work (with John Pantry  engineering), on 'Snowman'.  Demo acetates were cut, but the John Pantry-engineered IBC master-tape still survives  (presently with bassist Stuart MacKay).  It was during this time that Don believes the balance within the group went  adrift, with him taking uppers, time keeping (Late arrivals to rehearsals etc) lead to disputes and Don was effectively  "invited" to leave the band, and so it was that the classic Tintern Abbey came to an end.  The bands history here onwards  is well documented elsewhere.  Don moved to Turkey for a year where he played with a popular Turkish group.  Upon  returning to England, he gained employment with ITV as a sound engineer for three years and then as a freelance boom  operator in the film business and ceased to play guitar professionally

Interestingly, apart from one  promo gig in Holland, this Tintern Abbey played no UK gigs.

The text was submitted by Sir Henry Rawlinson and has been re-produced with kind permission.