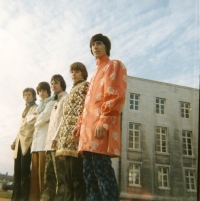 Formed in Thundersley, Essex circa 1965. Privately released a four track E.P. in 1967. The Mode were picked out by a talent scout from Decca records in May, 1967 and invited down the studios in West Hampstead to record two of their songs. Decca selected two songs for a proposed debut single release later that year. The proposed single was: Eastern Music (Back to Front) b/w In This World Of Mine. Although it was scheduled for a release in 1967, Decca lost interest and the single was never released.

In This World Of Mine was the intended B-side for the projected second single recorded for Decca records. Eastern Music (Back To Front) was The Mode’s projected second single release.
At some point, prior to 1983, a few seconds were erased during the instrumental section. This was a typical ‘cutting room’ editing method applied by a studio engineer. The method was otherwise known as ‘splicing’.
For the 1983 cassette release, I took a razor blade to the tape and simply spliced four bars out of the interrupted instrumental section, truncating the end section without too much of a detrimental effect if you are not listening out for it.
For authenticity’s sake, I have attempted to recreate the original version of the song by digitally copying and pasting the missing part using a programme called ‘sound forge’.

Dubbed from the meta master cassette
5. Eastern Music
6. Gone
7. She Won’t Be Here Today
8. In This World Of Mine (tape spliced version)
9. The Mode (Dance)
10. Girl
11. Backing Britain (live version)

All titles composed by Sharpling / Jones / Weeks / Millidge / Harrison.
All titles published by Flying Pig Enterprises. 1983 – 2011.
Original sound recordings copyright 1966 / 1967, The Mode Ltd.. Flying Pig Enterprises. 2011.
Thanks to Rupert Goddard for his great assistance in putting together all recorded archival material and photographic images. Special thanks to David Millidge for supplying all original materials.

All information and archival materials kindly supplied by Gary Millidge. 2011.

Special thanks to Gary Millidge.