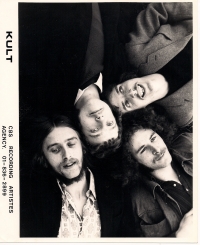 Formed in Bexhill-on-Sea, Sussex, circa 1966. Demo recordings made at Pye studio No.2 at Marble Arch, London, 1969. Produced by Vic Maile.

"The Kult was the brainchild of brothers Michael and Pete O’Driscoll back around 1967 / 68.
Their mother owned a horse riding stable in Ninfield Sussex England.
That house and village served as a home base for the duration. The brothers were joined by John Hales (Drums), John was influenced by Ginger Baker and was a master at the Double Bass Drum kit.
Guitarist Richard Melhuish, who was then in a Blues Band in London called the 32 /20.
Richard at that time was close friends with Rod Price, Guitarist (Shakey Vicks Big City Blues Band and later Foghat.)

The Kult played many gigs around the Sussex and London area supporting bands like The Who. They were approached by Vic Maile who got the band the CBS deal.

Mick went on to manage the band and Robert Seale joined as their bassist with Paul Brady on drums.

Then we just kind of stoppe. Like many bands we did not know what we had, held back some great songs while we looked for a better deal.  Great times though!" Richard Melhuish, September, 2011.

With special thanks to Richard Melhuish.