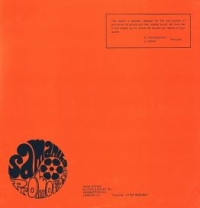 "Summary of the band's growth: Was originally formed in 1967. At that time they were called Magic Swing with material consisting generally of songs. Shortly, the name was changed later they reverted back to Magic Swing, but subsequently became Honeysuckle again. Original material was introduced changing the sound from harmony to powerful vocal sounds. ' The Factotums ripped us off in '66' claims lead singer Dave who also says 'We wrote all the Beach Boys Number one hits'".

Honeysuckle originated from Swindon as the Magic Roundabout circa 1967. Vocalist, Brian Bevan had originally fronted Chris and The Continentals in the mid-sixties and joined the band in 1969. Magic Roundabout then auditioned at Bob Potter's Agency studios in Mytchett, Surrey witha view to acquiring more live work and better exposure. The band recorded several original songs there in July, 1969 and re-named themselves as Honeysuckle shortly after. The band performed abroad, but this was after a successful audition to be Billy J. Kramer's backing band that unfortunately never materialised. Honeysuckle returned to the U.K. in 1970 and continued to tour and auditioned for Samantha Promotions agency for inclusion on a compilation LP as described above.