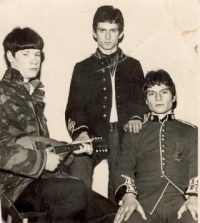 NB. The BMA would like to invite collectors and historians to share their knowledge on the possible whereabouts of any existing formats that represent the first recording session made by Friday's Chyld, thank you.

All songs composed by D. Lambert. Published by Fazz Music 2012.