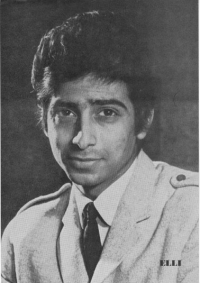 Elli Meyer (born Calcutta, India, 1946) arrived in London in the late 1950s. Held a job as a painter/decorator. Became a singer in a band called The Eagles in London in 1962 before joining The Neutrons then The Trendsetters (not the EMI act of the same name). Elli then joined The Infernos (Troy Dante) before meeting musicians and songwriters, Mike Finesilver and Peter Ker. Elli started to demo some of Finesilver and Ker's compositions backed by their friends, Vincent Crane and Drachen Theaker. Their demos came to the attention of EMI who issued Elli's debut single on 24th February, 1967. The demo was sent out incorrectly as 'Eli', but this was ammended for the commercial issue.

Although Never Mind b/w I'll Be Looking Out For You was a strong debut by an unknown singer, EMI also issued The Beatles Strawberry Fields Froever the same day thus swallowing up any attention that may have lay ahead for Elli. EMI were keen to issue a follow-up single and the Mister Man and My Lady Of Love recordings were selected for this a few months later, but sadly, no follow-up single ever appeared and EMI soon lost interest in the singer. Elli Meyer continued to record, but was battling even harder with diabetes, a lifelong illness that had daunted Elli throughout most of his adult life and singing career. More recordings were made, but there were no further publishing contracts or record deals in the pipeline. Mike Finesilver and Peter Ker continued to record with Elli at their own studios in Fulham, London. The studio was called Pathway and went onto host some of the New Wave acts such as Elvis Costello, The Damned, Wreckless Eric, The Police, Dave Edmunds, Siouxsie and The Banshees, Sham 69, etc..

Pathway studios was based at 2a Grosvenor Avenue, London, N5 2NR.

Mike Finesilver started to produce bands such as Love Sculpture (on their Forms and Feelings LP) as well as recording a variety of new bands from the early seventies through to the early 1990s at his Pathway studio in London.

Finesilver and Ker also wrote many songs for Love Sculpture and also co-wrote the song Firerecorded by Arthur Brown. They also enjoyed their own record release as Excelsior Spring for Immediate records (Andrew Loog Oldham) in 1968.

Elli Meyer passed away in 2001 after a long battle with diabetes.

With very special thanks to Elli Meyer (RIP) and Mike Finesilver.