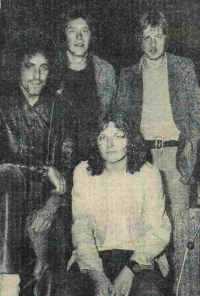 Charge originated from Derby in 1969. Steer, Dalby, Brown and Gibbs all attended Derby Art College in the late 1960s. Paul Brown was originally from Merseyside. Both group originals were recorded in the college library in 1969. Charge pressed up fifty copies of a promotional single in February, 1970, which was issued to friends and promoters. The band were joined by Nick Hoffman, a musician from New Zealand and were then managed by Laurie Jay. Laurie Jay had played in the Laurie Jay Combo, The Echoes and Nero & The Gladiators. The band managed a few gigs at Ronnie Scotts, but at this point Nick Hoffman had to leave as his visa had expired. After this, Andy Dalby took up an offer to join Arthur Brown in his new venture, Kingdom Come. Phil Brown and Martin Steer were next to follow and also joined Kingdom Come in 1971.

Special thanks to Martin Steer.